Pat Benatar is truly an amazing woman and singer; she performed on July 27th in Stamford, CT for Wednesday Night Live an outdoor summer concert at Columbus Park. Pat and her husband Neil Giraldo hit the stage like professional ROCK STARS. What I mean by that, are the obvious as well as the sad truth which is…. many artist run through a horrible rendition of their catalog of music. 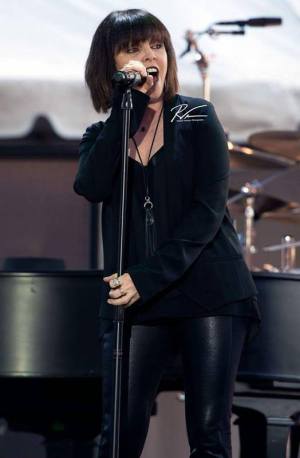 The set list looked like a BEST OF yes; they played everything and then some. Pat’s voice is in prime shape; she hit every note and handled the stage like no other. Neil, well he’s such an underrated guitarist and song writer. This Five foot power house was born Patricia Andrzejewski in Brooklyn, New York and raised in Lindenhurst, Long Island.

Pat started singing in elementary school and never stopped, working on her craft throughout her teens. At 19, after one six months in college, she dropped out to marry her high school sweetheart Dennis Benatar, an army draftee who trained at Fort Jackson, South. The couple would eventually divorce, in 1979.

Pat and Neil had the crowd singing alone from hit song after hit song. It’s always great to see the fans NOT disappointed in the arts live performance. The best part is the love story that the two share. They were married on February 20, 1982 and are going strong 34 years later.

These two are amazing in so many ways, I don’t think I need to insist on people to go out and experience all that is Pat Benatar.